This article originally appeared in the West Sacramento News-Ledger on Wednesday, February 3, 2016.

Writing by Thomas Farley
The art installation for Joey Lopes Park will be a knock-out. The City Council voted on Wednesday, Jan. 13 to accept a design from nationally known artist Michael Clapper of Denver, Colorado. He beat out over 75 submissions. There were no artist submissions from West Sacramento. Commissioners from the City of West Sacramento’s Arts, Culture & Historic Preservation Commission weighed in on the decision as well as the Yolo Arts Council, City staff, an outside artist, and a landscape architect. The artwork will cost $70,000, less than two percent of the budget to build the new park off of West Capitol.

Joey Lopes was a hometown boxer who fought in the late 1940s and throughout the 1950s. At many times he competed at the Memorial Auditorium across the river. In his early career he was selected for the 1948 U.S. Olympics boxing team. He went on to fight three times for the World Lightweight crown. A community leader in retirement, Lopes did work for the West Sacramento Sanitary District, the West Sacramento Optimist Club and the West Sacramento Babe Ruth Baseball League. It was only natural that a park be named after him, and just as naturally a fitting tribute to him in art would be constructed.

As solid as the boxer and community steward himself, the stone and steel artwork will show Lopes at the height of his powers, in profile, reaching out to deliver a punch. The metal’s rusty finish connects with his blue-collar roots, the son of a grocer, fighting his way toward the top of his sport. Where did the ideas and inspiration come from to produce such a design?

Michael Clapper says he drew on materials supplied to him by the Yolo Arts Council and the West Sacramento Historical Society. But as with all of his projects, he did his own independent research as well, even taking to watching old Joey Lopes fights now on YouTube. Along the way, Clapper said he could identify with Lopes rise from a working-class neighborhood, as he did from north-east industrial Ohio, the first in his family to graduate from college.

A collaborative effort, Clapper’s team includes an engineer, a graphics company, a water-jet shop that cuts steel, and even an electrician to provide the installation’s night-lighting. As this article goes to print, the artwork’s stone is being brought from Kansas to Clapper’s studio. Preparations are underway to meet a tight deadline, with late May the hoped for completion date. Clapper wants West Sacramento to know that he is proud and pleased to be selected as the champion for Lopes’ tribute and hopes that it will embody the boxer and civic leader’s spirit: fighting for the community. 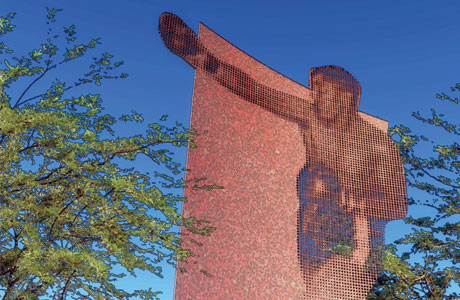