This was my first article for The West Sacramento News-Ledger. It appeared on February 19, 2014. This post contains additional photographs not available in the newspaper. Scroll down to see the article:

The Road to the C.H.P. Starts in West Sacramento

The men and women officers who uphold that motto begin their careers right here in West Sacramento. Located on 457 acres off of Reed Avenue in the city’s northwest, the present CHP Academy began construction in 1974 and graduated its first class of recruits in 1976. 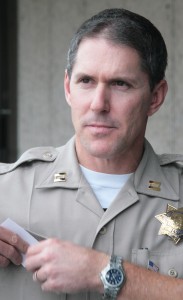 The Academy Commander, Captain Chuck King, recently invited the News-Ledger to tour the property. Judging by the number of cars in the parking lots, it was apparent upon arrival that the Academy is a major employer. Approximately two hundred part-time and full time employees work at the site, including sixty non-uniformed CHP employees. These people do everything from administrative tasks to cooking in the kitchens.

Next to the lobby in the headquarters is the recently completed CHP museum. It houses three motorcycles from years’ past as well as exhibits detailing the history of the Highway Patrol. Clearly evident are tradition, pride in service, and an esprit de corps among C.H.P. staff.

Step through the administration building, and you’ll find a central courtyard and the badge-shaped, five-pointed Memorial Fountain. The fountain pays tribute to the 225 California Highway Patrol Officers that have been killed in the line of duty since the organization was founded in 1929. (The most recent officers to give their lives were Officers Juan Gonzalez and Brian Law, partners and friends who graduated together in 2008 from the academy. The pair died Monday morning in a crash while responding to a call near Fresno.)

Every week, in a tradition that binds the generations of graduating classes to each other, cadets polish the brass name plaques that are affixed to the sides of the fountain. 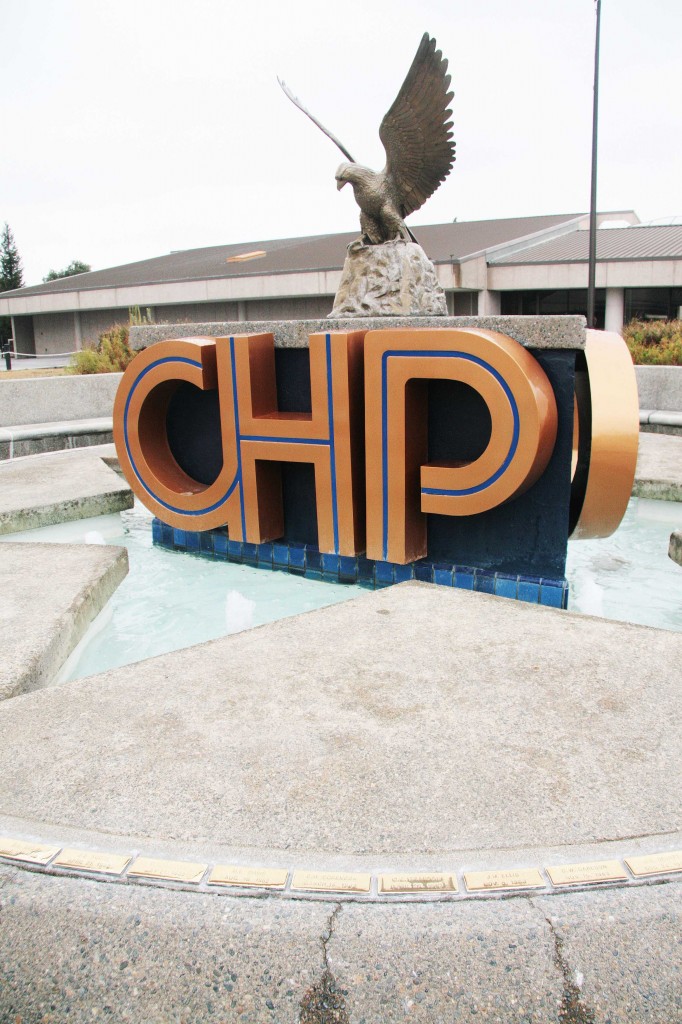 The CHP Academy’s memorial fountain in a central part of the Reed Avenue campus. The fountain is ringed with brass plaques honoring each of the California Highway Patrol officers killed in the line of duty since the agency was founded. Some of the brass markers can be seen in the foreground. (News-Ledger photo)

King led News-Ledger reporters toward the dormitories, which accommodate recruits during their 27-week training session. Nearby were classrooms, a gymnasium, and even a PX (a market). Facing the courtyard is a dining commons that can seat 400 people at a time. Some two hundred cadets in two training classes are presently at the school.

“We’re a completely self-contained facility,” King says. “The cadets live here for the duration of their training. And we are the only CHP Academy in the state. A lot of people are surprised at that. Since 1976, every officer you see working the road has gone through this academy.”

Inside the classroom was an amphitheater with rows of seats perched high above each other. Instructors in the well of the room supervised the class. Cadets looked on intently as two of their peers demonstrated how they would conduct a hypothetical accident investigation.

A rifle range, a pistol, range, a helipad, and a running track, are just some of the facilities beyond the main campus buildings. But the pride of the Academy is its Emergency Vehicle Operations Course, or EVOC. This is a set of specialized tracks that allow cadets to practice everything from wet-weather driving to high-speed maneuvers.

One of those driving courses is a “skid pad” – a large stretch of pavement outfitted with pop-up sprinklers, and graded to create puddles several inches deep. The sprinklers were activated for a driving demonstration. Patrol cars used for foul-weather driving practice are deliberately equipped with “bald” tires – all the better to practice hydroplaning and emergency steering techniques on wet roads. Captain King explained that all of the water from the sprinklers is re-circulated and recycled.

Officer Julie Saraiva, an EVOC instructor, introduced herself to reporters and promptly threw a practice car around two laps and a dozen “S” turns. At each curve she accelerated and then put on the brakes, sliding the car into one turn and then another. 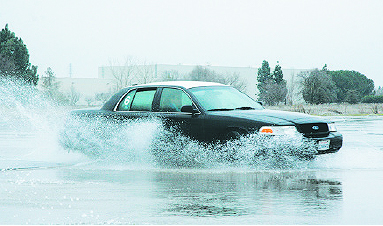 CHP driving instructor Julie Saraiva demonstrates how to get a patrol car into a skid — and, more importantly, how to get out. A reporter is in the passenger’s seat. (News-Ledger photo)

A visiting reporter then took the wheel, at one point overcorrecting in a wet skid and spinning the car 180 degrees to face the wrong way. Instructor Saraiva nevertheless gave him good marks for a first session on the skid pad.

“Skid pad” driving is just part of their total EVOC training, one of 42 total “learning domains” that a cadet must master.

The CHP is selective. Captain King stated that over 20,000 people applied last year. The cadets now on-site represent just one percent of that number.

What quality does an applicant need most?

“The most important characteristic for a future officer is integrity, a good moral compass,” said King. “After they get to the Academy, the most important thing is dedication and staying focused on the training.”

To patrol California’s highways, C.H.P. officers must first take the road through West Sacramento.I was doing everything you’re not supposed to do on a wet road. On purpose. In a police car.

What’s the best way to teach high-speed emergency maneuvers? Start a person out on a low speed track. A flooded one. Using a car with bald tires. Oh, and you’re supposed to dive into each turn as fast as you can. Sound crazy? Hardly. This approach lets a potential officer know how their cars will act with violent movement at speed.  But for now, we are going slow. Sort of.

The CHP Academy let me pilot one of their cars around their skid pad, a course of ‘S’ curves, one after another, in a complete loop. After each loop you try to go faster, for each turn you try for more control. All the while the instructor is telling you to “Gun it!” as you slam into each curve. But I had some instruction first.

I was introduced to Officer Julie Saravia, one of CHP’s most expert driving instructors. She walked me over to our black and white steed, a long-retired machine that was now helping cadets learn the wiles of mad motoring. Throwing it into first, to keep the speed down to a somewhat controllable level, Julie headed us out on to the track. A hundred or more sprinklers sprayed water around the entire circuit, even though it had just rained. (Can’t have enough water when you are trying to get sideways.)

As each turn approached, Julie accelerated, then broke hard, letting the back come around in a slide. Taking pressure off the wheel, ever so precisely, she straightened out the car and pointed it into the next turn. Accelerate, brake, let off, repeat. It reminded me of the fun I used to have in a pickup on gravel roads. After two laps she finished, parking the car in front of the CHP Academy Commander and my editor. I looked at them, thought of this chance, and in a quiet voice, trying to hide my excitement, I said, “I’ll take it around.”

I was surprisingly relaxed. Although I didn’t want to take up the time of the Commander or my editor, I was there. If I wanted to write a longer story for a national magazine it was incumbent on me to take this opportunity. Motoring into the first turn, the instructor yelled “Gun it”, precisely at the time most sane people would be braking. I did as I was told, then slammed on the brakes to keep from going over the course outline. Predictably, the car wheeled around in very quick fashion, to which I responded by letting off on the wheel.

I managed the first two or three turns, somewhat, but on the fourth I spun the car completely around, almost in a 360 degree turn. Facing the wrong way, Julie encouragingly said, “You can go back that way.” Good. Let’s go that way. More blasting into turns, more outrageous spinning. Returning to the start, Julie pronounced me a natural. She said that with four or five more laps I would have it down. Perhaps. She said that most cadets were, by comparison, pretty tense and high strung. My editor pointed out that they would be tested. Good point. For them, it’s their careers. For me, it’s a story. But a fun one.