This article appeared in The West Sacramento News-Ledger on ——- 2015.

Writing by Thomas Farley, graphic courtesy of Google Earth and modified by the author

West Sacramento’s waterfront has stories behind every tule, wharf, and wetland. Here’s a few partial sketches about three different properties. Together, these accounts and anecdotes form a larger tale far from finished.

Seaway is a mostly rectangular shaped land directly south of the Port. Some two hundred acres, it stretches from the Port’s border on the west to the Palmadessi Bridge on the east. Despite its name, this is actually lakefront property. How’s that?

When you look at the Port’s turning basin, its widest part, you are looking at Lake Washington. This old and isolated lake of the Central Valley is now a Frankenstein lake, its depths and contours dredged and altered to make room for the Port. To boggle your mind even further, you’ve probably driven over Lake Washington without even knowing it.

As you travel across the Seaway acreage on Southport Parkway, you pass over the vestigial remains of the lake. See the photo. Ever notice those “Wildlife Crossing” signs on Parkway? This area is part of Lake Washington, a finger that extends almost to the Pheasant Club at the intersection of Lake Washington Boulevard and Jefferson. A true wetland when flooded, all parts make for good birding and wandering.

The Stone Lock District was named for William G. Stone, “The Father of the Port.” It extends from the Palmadessi Bridge on the West to the Sacramento River on the East. Its distinctive features are the Barge Canal, the navigation lock, and its accompanying control tower. A civil engineering rarity in California, the lock is one of only three others in our state. Why is there a lock at all?

Sacramento River water can be twenty feet higher than the Port. The lock’s gates keep the River from flooding the property and from depositing silt. Boats traveling between the River and the Port used the lock to lift or lower craft to the proper level. Decreasing boat traffic and high operating costs doomed the lock and it was decommissioned in 2000.

The Mike McGowan Bridge is a new addition to the District. Its roadway connects two parts of South River Road at a “T” intersection. Soon, Village Parkway will join that intersection. Note the dashed line in the photograph. This extension of Village Parkway through the Honda Hills will provide an alternative to Jefferson Boulevard and a corridor to Raley Field and The Bridge District.

A few years ago the Cordish Companies proposed ambitious plans for the Stone Lock District but negotiations fell through. The architectural renderings are still on-line and show a tree-lined waterfront community bustling with pedestrian and bicycle traffic. Shops and recreation were depicted, with the Sacramento River and the Canal providing a cool and scenic background. It’s the kind of marina village that the City still hopes for. And the kind of community most people would also like in another waterfront area, The Pioneer Bluffs.

The Pioneer Bluffs starts at the Barge Canal and runs north to Highway 50 where the Bridge District begins. South River Road bisects the area. Jefferson Boulevard marks the Bluff’s west boundary but redevelopment will probably come first on its eastern side along the Sacramento River. Removing the CEMEX concrete silos was a vital step in repurposing this riverfront. What’s next? Perhaps a decade long process of relocating the tank farms, filling stations, and maintenance yards that line South River Road.

The stories of West Sacramento and its waterfront are still being written. In time, they should make quite a book. 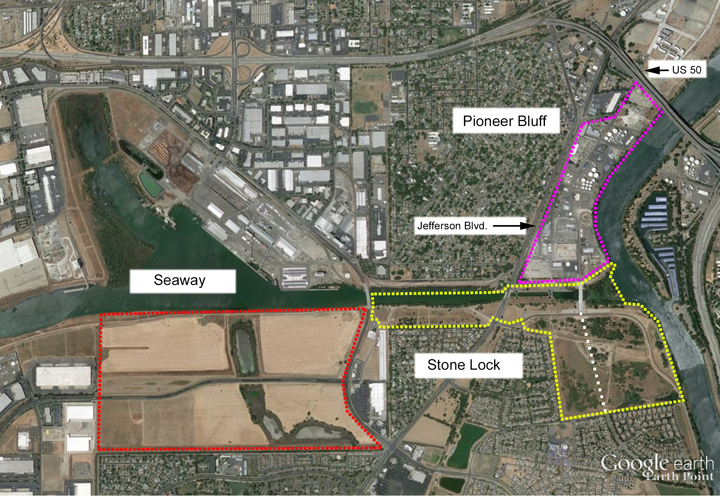